To forgive is to set a prisoner free and discover that the prisoner was you. ~Lewis B. Smedes 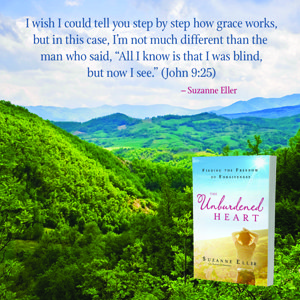 In our last week of this study, I wrestled with which chapter to end it with, and as I reread Stephanie’s story and Chapter Seven, the word krateõ seemed the most fitting.

Krateõ means to accomplish, to take hold, to attain.

On Wednesday, you’ll meet beautiful Stephanie Shotts, whose story is featured this chapter. She was born of rape, sexually abused, and no one every said they were sorry.

No only were they not asking for her forgiveness, but  their acts sent Stephanie down a road that later left her desiring forgiveness for her own choices.

Read Chapter Seven and share your answers to the following questions:

Forgiveness was key to Stephanie’s healing, and in this case — even when her offenders took no responsibility for their actions — it meant that there was a role reversal ahead for this precious, beautiful daughter of God.

1. Jesus breathed on the disciples, and change took place.

a. Read Romans 8:2-4. In many cases, this “breathing on man” is considered to reflect the Holy Spirit. What effect does the Holy Spirit have on mankind?

b. If the effects of sin are removed, does this mean that the effects of another’s sin (in Stephanie’s case, that of her relatives) are also removed from your heart? What does that truth mean to you?

2. The disciples moved from fear to faith, from hiding to harboring a light so bright it couldn’t help but be seen. To being confused to being compelled. What do you believe God has in store for you as you forgive?

If you are dreaming about publishing a nonfiction

"What can I do?" That's a question we may ask when