I purposely chose women to feature in this month’s Forgive to Live feature that I knew personally. You see, when you know someone and they are funny and genuine and in love with Jesus, you feel confident in sharing their story.

Connie tells of a recent moment when she realized that her enemy wasn’t at all who she thought it was. This is her story:

A minor mistake grew into a major conflict when we tried to talk it through while emotions were still running high. Her mistake was blamed on me and there was no apology offered on her part.

Although I asked God to help me forgive and move on in the months since, I just could not seem to let go of the hurt. Now she was standing in my garage.

As much as I hated to admit, a small part of me admired her.

Not only would I not have stopped at her garage sale but I had actually resorted to evasive maneuvers when seeing her in public to avoid exchanging awkward pleasantries.

She asked me a question which opened the door for a witty response. She chuckled. Appreciating her effort, I asked her how she had been. She shared her family of four had opened their doors to foster care. They had taken in two sisters five months before and now were beginning the process of adoption.

My respect for her grew.

She then talked of her sister who I was aware had problems with addiction. Unfortunately, her sister’s problems had grown worse and they felt the need to take in her daughter.

My admiration for her turned into shame for myself.

I had vilified her simply for a mistake she had made. My unforgiveness had allowed me to miss out on a meaningful friendship with a truly wonderful person.

We continued to share life and laughs and by the time she left, our conflict was a distant memory. Healing had taken place.
Wanting to learn from my mistake, I began to ponder what could have been done differently.

When she did not take the responsibility I felt she should, I exacted my own brand of justice by avoiding her and not trying to repair the friendship. My pride had been hurt and I was determined to make her “pay.” However, much pain could have been avoided had I just squashed my pride and forgiven her on the spot.

Justice is not mine but God’s.

I prayed for God to help me forgive but would then avoid the opportunities He provided for healing to take place. When he placed this woman in my path, I would do all I could to avoid her. I wanted God to work without actually doing anything on my part. I should have taken the first opportunity God gave to speak with this woman in order to move on from the conflict.

My hurt clouded my view of the true person my friend was and convinced me she was nothing but a villain. As I brewed over my hurt, she took on a more evil appearance in my thoughts and I soon forgot her good qualities. Rather than dwelling on my pain, I should have focused my thoughts on her wonderful qualities.

All friendships should begin by incorporating grace knowing that everyone makes mistakes. When we face being hurt by a friend, let’s choose to extend that grace, forgive immediately, and focus our thoughts on the person’s good qualities rather than the hurt.

Forgiveness is not always easy but it is always the best choice. 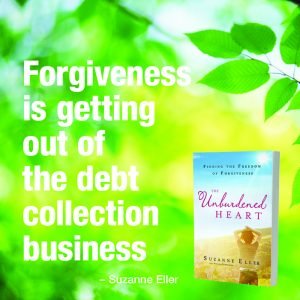 Connie Johnson’s love for God, family, chocolate, and Diet Coke defines her. She has been married to the love of her life, Craig, for 24 years and has three lovely and entertaining kids who give her plenty of material for writing and speaking.

As a Christian Women’s Speaker, her passion is to help all women recognize just how extraordinary they are and how much each has to offer. Connie believes there is no such thing as an ordinary woman or life.

You can find her online at www.conniedavisjohnson.com.n married to the love of her life, Craig, for 24 years and has 3 lovely and entertaining kids who give her plenty of material for writing and speaking.

Connie shares a powerful story of allowing God to rewrite the chapters of our lives in The Unburdened Heart: Finding the Freedom of Forgiveness.

I pray that you’ll check out this resource that one woman says, “rocked my world” as she found release from the bonds that held her stuck for way too long.

These are two of my close friends. In fact, one of them will be sharing her story next week.

Maybe you have a friend who was once part of your life, and a conversation or a misunderstanding, or maybe just a flat-out mistake on one or both of your parts, made that friend feel like a frenemy.

Will you take a step toward forgiving today?

Will you ask for forgiveness? Will you receive it?

But Suzie, what if she doesn’t want my friendship anymore?

Well, that’s not really the point, is it? It’s amazing if reconciliation happens, but what’s more relevant is what takes place in your heart.

The real enemy is described by Jesus as a “liar” and as someone who desires to steal, kill, and destroy (John 10:10).

This enemy uses words, conversations, misunderstandings, differing points of view and our failings to divide and isolate, especially in the body of Christ. Forgiving means that we look beyond the surface feelings and event to see the plan of the real enemy, and confound it with forgiveness.

What step will you take toward forgiving today?

If you have questions or comments, Connie will be stopping in throughout the day to answer your questions. I’ll also hang out and we’ll pray and encourage each other to live free.