I don’t know if I’ll ever get there from here.

Her words are sincere. She desperately wants more of God.

Sometimes her circumstances make her feel trapped. Feeling trapped makes her say things she regrets. Those regrets make her feel as if she’ll never change.

When she looks at the final destination — feeling close to God, transformed, free — it seems a million miles away.

She shakes her head. “Addicted. Broken. I lost everything I cared about.”

“Where are you now?”

But have you considered how far He’s brought you?

I’m not discounting her longing for Jesus. For freedom.

I’m right there with her. It might look different for each of us, but when you’re marked by Christ as His, you always want all that He is offering.

But don’t forget to mark the miles from where you first began.

Don’t forget to celebrate His tangible presence in areas that used to be utterly damaged.

When we look back, we are able to look forward with assurance.

Here is a trustworthy saying that deserves full acceptance: Christ Jesus came into the world to save sinners—of whom I am the worst. But for that very reason I was shown mercy so that in me, the worst of sinners, Christ Jesus might display his immense patience as an example for those who would believe in him and receive eternal life.

Now to the King eternal, immortal, invisible, the only God, be honor and glory for ever and ever. Amen. 1 Timothy 1:15-17 (NIV)

Celebrate what He’s done and praise Him for the work yet to be completed.

But Suzie, will God give up on me? 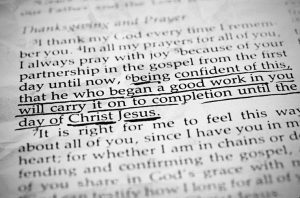 Your Heavenly Father is brimming with mercy and He’s patient.

You don’t have to fit in anyone else’s schedule in the healing process. Every step you take is worthy of celebration.

Say it out loud in praise!

Let hope flare up inside of you.

Just as God has brought you this far, He’ll walk with you all the way to the end.