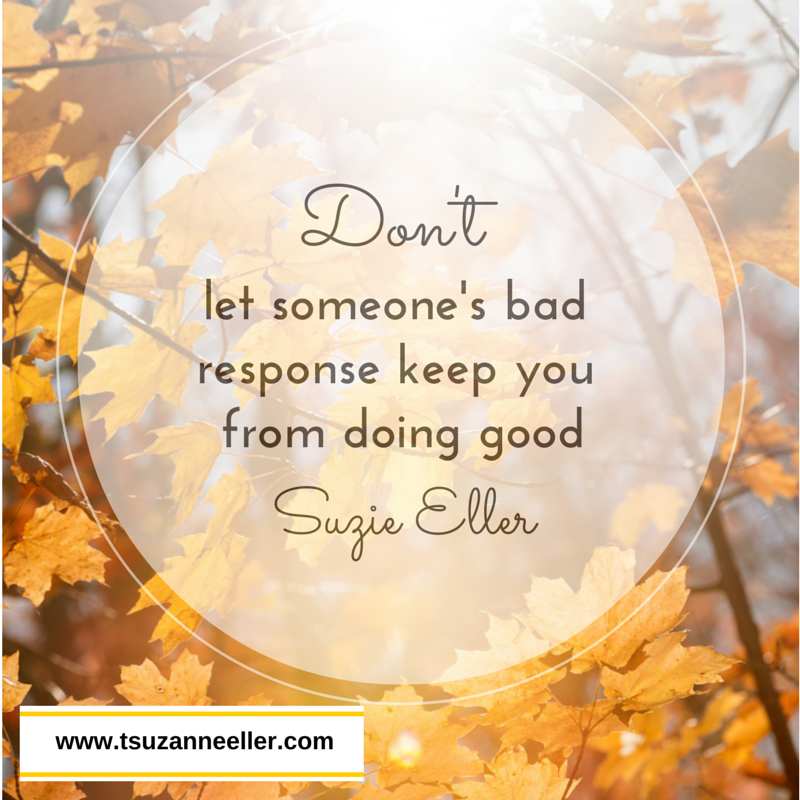 She took a risk and tried to do the right thing. Her words were tangled and misrepresented. Her actions held up to light and found faulty.

“I’m never going to try to help anyone ever again,” she said.

I didn’t know what to say. The reality is that she did try to do something good and it backfired. It took guts for her to say and do something when everyone else had given up.

The response to her beautiful gift was criticism. Anger. Gossip. Her motives were questioned.

My friend needed a few days to work through the emotions that weighed heavy. I didn’t really have advice for her at the moment because she wasn’t asking for it.

But maybe you know how my friend feels. When someone hurts you and it wasn’t deserved, you might want to respond this way:

Hit them where it hurts.

Make them take it back.

Hit them with a passive-aggressive remark.

Turn the other way and give up entirely.

Later, when my friend and I talked again her feelings were still tender, but she was ready to talk. I only had one piece of advice for her:

At heart, my friend is a beautiful person. She’s generous. She’s a fighter in all the right ways. She’s climbed out of an unhealthy place and she grieves over those who remain there. God has awakened her to the fact that every women is worthy of feeling safe and nurtured.

Speaking up was a huge risk. Crossing a line to offer words of comfort was another. It didn’t work out the way she thought, but my prayer for my friend is that she keeps being exactly who God is calling her to be.

And then there’s the second half of my prayer.

When you’re marching into the enemy’s territory, you launch a battle.

The last thing he expects is for you to slug back with good.

In Acts 16 Paul and Silas set a woman free from demonic bondage. What do they get for freeing this woman? They are severely beaten and placed in stocks in a dark dungeon-like prison.

I don’t know about you, but that’s a really bad day for me. So what did they do?

They slugged back with good.

With untended wounds in dark spaces surrounded by chains and guards, they sang at the top of their voices.

–> Which caused some kind of heavenly earthquake.

–> Which caused chains to drop from their hands and feet.

–> Which caused a guard to fall to the ground in fear and surrender to the Lord.

Rather than allow the enemy to use someone else’s bad response keep them down, they turned it into praise.

Slugged ’em good, yes they did.

My friend is better now. It happened. It hurt. She is healing.

We live free when we put up our dukes keep on being exactly who God has made us to be.

If somehow you’ve been doing good and the response of someone else made it feel bad, let’s pray together, okay?

Father, thank you for this woman who loves you. Thank you for her bravery. Thank you that she listened to you and that is a beautiful example of faith in action. Lord, this bad response isn’t what she hoped for, but she praises You. Thank you that the good in her (which comes from You) shakes the strongholds of the enemy. In Jesus’ name, amen.

If you are working on forgiveness, The Unburdened Heart might be exactly what you need. It’s gentle. It’s deeply rooted in Biblical principles.