Why we all could use a little salt 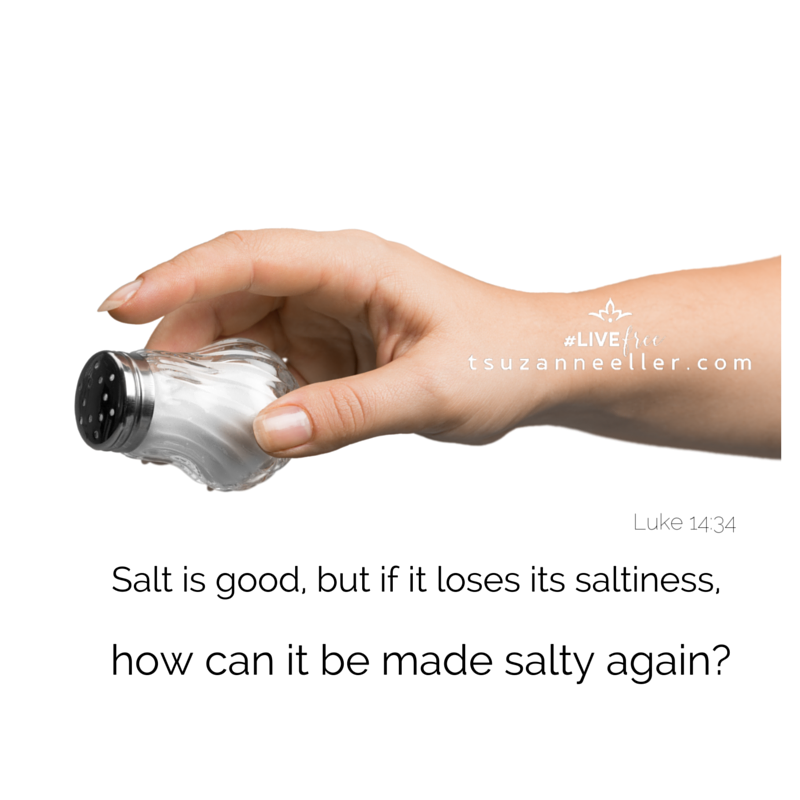 It’s after one in the morning.

It’s been a crazy travel day.

Lots of time sitting on tarmacs. Lots of delays. One of those days when it feels like you’ve been wearing high heels for 24 hours straight.

And now I’m finally home and before I go to bed, I just want to hang out for a few minutes.

Last week I was reading my Bible and I read this verse.

Salt is good, but if it loses its saltiness, how can it be made salty again? It is fit neither for the soil nor for the manure pile; it is thrown out.

yesterday I thought about this verse again as I rubbed shoulders with people all day long. People rushing past me in the airport. The driver that so graciously picked me up. The person at the front desk of the hotel. The woman who met me at the studio. The host of the TV show who loved her job so much. New friends I gained through the trip. An unexpected visit with an old friend. Another driver. People sitting next to me on the airplane. The tired mom who seemed to have a mountain of bags to finagle, pushing the stroller with a cranky baby inside.

All day long there were encounters and I saw what Jesus was talking about as I encountered salty people.

You see, salt doesn’t do much in the shaker. Yet when it rubs onto that steak about to hit the grill, or that dish that needs just a little oomph, something special happens.

There were people that stood out yesterday simply because they were salty.

One of the men who drove us to the airport lit up as we talked about missions.

“That’s my dream,” he said. “I think there’s something special about traveling around the world and doing mission work.”

I don’t know his story, except for the few tidbits I learned as he drove. What I do know is that his heart for missions and God rubbed off on us in the 45 minutes it took to get to the airport.

Then there was a new friend. Over lunch she shared about her daughter who has some special needs. It’s hard, and she’s often misunderstood as a parent because others haven’t walked in her shoes. As she talked about her daughter and how hard she’s fighting for her, her faith sprinkled generously in every word she spoke.

Then there was another author. We sat in the green room (it really was green) and suddenly found ourselves in a gut honest conversation about ministry. Her honesty and her openness to God in the hard places were beautiful.

There was that person who helped the tired mom, standing with her, helping her put her bags in the overhead. Offering to do whatever she could to assist her.

I pray that I’m salty.

A salty life isn’t a perfect life, but an honest one.

It’s when you have faith though you aren’t afraid to say that life can be hard sometimes.

It’s when you share your greatest dreams and they involve making a difference, because Jesus made a difference in you.

It’s when you selflessly see the need of another and do something about it, without expecting anything in return.

It’s when you are in ministry and it’s obvious that it’s hard work, but you do it because it draws people to Him.

All day long I watched people pour out salt as they rubbed shoulders with others.

They stood out because sincerity is salty.

Believe me, there were others pouring out some stuff and it was “fit neither for the soil or the manure pile.”

And I’ve been there too, usually when I’ve poured out and forgotten to fill back up and all they get is what’s left at the bottom, hardened and flavorless.

So that’s where I’ll settle for this morning.

More than ever I feel God calling us to be salt and light. I know that sounds churchy, but my prayer is that we — as the church — rub shoulders with people and they walk away having felt something more than the ordinary.

Are you asking God to fill you back up?

What is one way you can be salt and light to someone today?