Thank you Day #16: What to do when people make you feel small 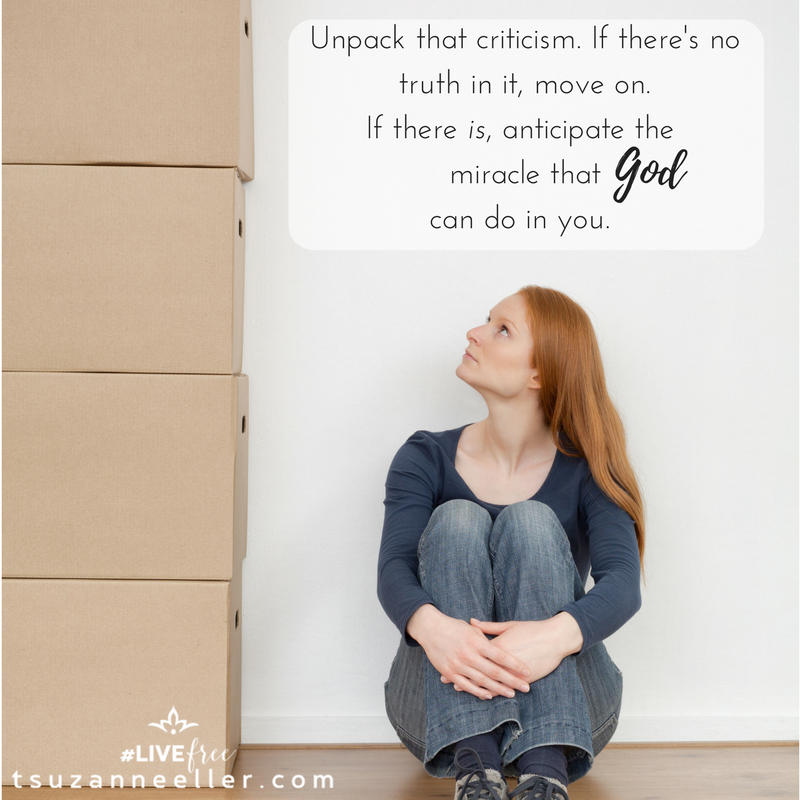 An email sat in my in-box.

The email had lots of Jesus words thrown in — with an edge. It isn’t the first I’ve received. There will be more.

What do we do when we receive criticism?

I don’t know about you but criticism can be hard to take, especially when it’s not delivered in the right way. On that day, the email landed in a tender place in my heart. It felt like she was pointing a finger. My first thought was, “You don’t know me at all.”

Emails or messages like this are far from the majority. If they come, they are mixed in with encouraging emails. Honest questions. Stories that make me laugh or cry, and emails that totally make my day.

On Day #16 of Living a Life of Thank You, we’re going to look at criticism and explore what to do with it.

Living a life of thank you means that we are totally aware that we are growing, flawed, and totally human. We aren’t above critique and our hearts are wide open to learning more about the world, others, and ourselves.

At the same time, we don’t receive every word of criticism as gospel. We wisely unpack criticism or critique to find what is good, what is helpful, and leave behind what needs to be discarded.

It starts as we discern

Before we react to criticism, it’s good to ask these simple questions.

Why did they speak it?

Does it hold value?

If it’s an opinion from someone who doesn’t know you, that holds less weight than critique from someone knows us well and loves us enough to speak the hard stuff.

Knowing why is also valuable.

Sometimes critique comes from something we’ve said, or actions that impacted others (and we may not even be aware). Sometimes it’s something that they see, but we don’t, and it’s lovingly communicated. Other times, it’s not communicated well but there’s still glimmers of truth hidden in there.

When we ask “who” and “why,” these questions help us discern what to do next.

But if you bite and devour one another, take care that you are not consumed by one another. (Galatians 5:15)

This scripture was written by Paul to a church wrestling with criticism. His advice was for those nipping and judging and eating up others with their words, but it also holds true for those of us on the receiving end.

When criticized, our next step is to make a decision on how to respond to it (or how not to respond).

I started this story with an email that had an edge. Though I didn’t love the delivery, I sensed the person’s motives were pure. I let it rest for a day, read it again, and found a glimmer of truth nestled in her words.

[bctt tweet=”When criticized, we unpack it. Throw away the bad. Deal with the good. Now we are free to move on. It no longer holds us back. ” username=”suzanneeller”]

First, I prayed over the email and the person who sent it. I prayed for my own heart. I pulled the glimmer of truth out and asked the Lord how I could apply it. I sent a brief thank you, deleted the email, and went on with life.

This is where we often get tripped up.

Once you discern and decide, it’s time to do.

If criticism holds no truth — move on or delete it.

If it is truthful, then thank God for revealing it and receive it.

If there is action to be taken, take it.

If there is growth to be gained, step into it.

This sounds easier than it is to practice, but I see too many of God’s amazing daughters tangled up in criticism. They worry. They beat themselves up. They get defensive. They tuck away a criticism and let it fester. Or nurture it, attaching it to emotions like anger or doubt or comparison.

None of these help us live a life of thank you.

Did you receive criticism today?

If you didn’t, I promise you that it will come your way at some point.

Examine the criticism with the help of the Holy Spirit.

Toss out what isn’t worth keeping.

Father, our human nature wants to hold on to criticism, even when it’s unwarranted. Instead, help us to meet it head-on, with wisdom. To unpack it, grow through it, know when to get rid of it, and then to move out of that space into the next adventure you have for us, amen.

Day #16 of Living a Life of Thank You

Q: What is your natural reaction to criticism?

Q: Why is it important to discern between helpful criticism (even if it’s delivered a little wonky) and unhealthy criticism?

TIP: I have a rule for emails and social media messages that are scary, feel a little crazy, or flat-out hurtful: I hit the delete key. I don’t entertain it. I don’t respond. I don’t give more than 30 seconds of my heart to it.

If you liked this blog post, you may find these helpful as well: