Forgive to Live: How do I forgive if they aren’t willing to change

In Taylor’s story, she was ready to change, but her mom wasn’t. We often remain stuck because we are waiting for someone else to change before we offer up our wounded heart to God, and let Him help us live free.

This is from page 35 of The Unburdened Heart: Finding the Freedom of Forgiveness 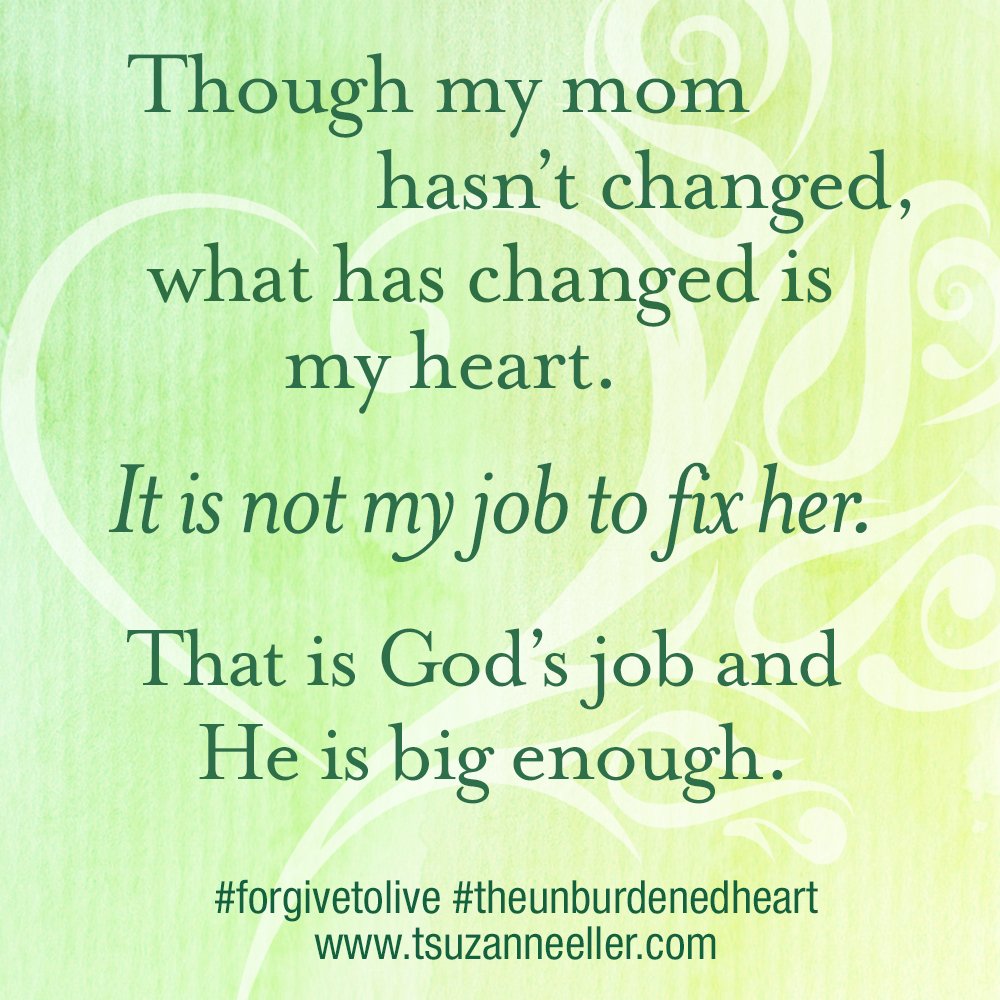 What do you do if you are changing and the other person is not?

Jesus was at the home of a good man named Simon (Luke 7:36-50). While they were eating, a woman enters the house. This isn’t unusual, as Jesus is an honored guest, and many have come to meet him.

But this woman is the town prostitute.

She kneels at Jesus’ feet and weeps; then she dries her tears that have fallen on His feet with her hair. She pours perfume over His calloused, road-weary feet and kisses them. Simon, the host, stands by, confused.

Why is this person in my home?
Why doesn’t Jesus push her away?
Does He not realize what kind of woman is touching Him?

Jesus looks up at His host who has said nothing audibly at this point and remarks, “Simon, I have something to tell you. . . . Two people owed money to a certain moneylender. One owed him five hundred denarii [a denarius was the usual daily wage of a day laborer], and the other fifty. Neither of them had the money to pay him back, so he forgave the debts of both. Now which of them will love him more?”

Simon replies, “I suppose the one who had the bigger debt forgiven.”

“You have judged correctly,” Jesus says.

Then he turns toward the woman and says to Simon, “Do you see this woman? I came into your house. You did not give me any water for my feet, but she wet my feet with her tears and wiped them with her hair. You did not give me a kiss, but this woman, from the time I entered, has not stopped kissing my feet. You did not put oil on my head, but she has poured perfume on my feet. Therefore, I tell you, her many sins have been forgiven—as her great love has shown. But whoever has been forgiven little loves little.”

We often romanticize stories from the Bible, but let’s put ourselves there for a moment.

Somewhere there is a family whose daughter had turned to prostitution. It’s not what they hoped for their daughter. It has brought shame on their family. They hide their heads when their daughter’s name is mentioned.

Perhaps there are abandoned children––not an unlikely thought due to her circumstances and the time period. What do they think of their mom? What shame do they carry? How many times have they cried themselves to sleep? What do the other children in the temple have to say about their mom?

Maybe there are women in the crowd whose families have been impacted by her profession.

She cannot walk through the streets without her neighbors crossing to the other side, pulling the hem of their robes away so that she will not soil them. She stands at a distance at noon while all the other women gather at the well, talking and laughing. She waits until they leave so that she can fill her bucket without their condemnation or gossip.

Simon has opened his home and put on the best feast for Jesus, his honored guest, and yet this woman dares to boldly walk across the threshold of his home and intimately touch the Master.

She’s a bad person. She should know better than to think she deserves mercy. She should change/could change/needs to change. Everybody knows that. How can the Master not see it?

If your mom or dad or spouse or caregiver is like that woman, you might very well feel the same as Simon.

We don’t know what led that woman to become the town prostitute; but what we do know is that she somehow hoped that Jesus might love her in her brokenness.

In many cases where a people are addicted or in bondage, it is hard to turn away from the image in the mirror that says, “You are sick; you have wasted your life; your choices affect those you love; you are not worthy of love.”

They can drink more or numb themselves further with substances; and when they wake up, there’s just more carnage to remind them of the people they’ve become.

After her father’s conversion, Karen (note: Karen’s story is shared in Chapter Three of The Unburdened Heart) later discovered that he used to pray repeatedly for mercy. The day she left a note was a tangible sign that perhaps God had heard his prayers.

To aphiemi love in this passage in Luke 7 is to heed a call from God’s heart that loves those who cannot love themselves.

We’ve already discussed what forgiveness isn’t and the practicalities that come with loving someone whose destructive choices are affecting themselves and others. But this is a conscious choice that hears the knocking on the heart that says, “love me.”

It’s hard to grasp so great a love, isn’t it?

Oswald Chambers once said, “It is possible to take the forgiveness of sin, the gift of the Holy Ghost, and our sanctification with the simplicity of faith, and to forget at what enormous cost to God it was all made ours.”2

We’ve received that kind of forgiveness, but how do we offer it to another?

Like Simon, our efforts aren’t the focus of this story. To aphiemi forgive we acknowledge that this person, with debt so deep that a lifetime of apologies won’t suffice, is valuable to God.

It’s a shift in perspective that opens the door wide enough to see that person in a different way.

We aren’t responsible to pardon the person or change him or her, that’s God’s job. But we become more like our heavenly Father as we let compassion tiptoe in.

From Suzie: Forgiveness isn’t allowing abuse. It’s not allowing you or a loved one to be in danger. This is a response of how can we emotionally and spiritually live free when we’ve been impacted by a broken loved one, and we want healing.

It’s showing you how God is able and oh-so-willing to fill the gaps left by an addicted parent.

Taylor will be stopping in today to share her thoughts with you, to pray with you, and I’ll be here, too. Today is an invitation for you to receive freedom from those feelings that you’ve carried for way too long.