Forgive to live: Is it possible to forgive unfaithfulness?

I met Anna years ago.

I didn’t know at the time that she had a dark secret. . . until one day she told me that she and her siblings were terribly abused by her dad.

She left her childhood home and began to heal. It was sheer joy to watch this young woman grow over the years into a strong woman of faith, and one day, to marry a really good man.

One who was kind to her. One who lived out his faith.

This is Anna’s story.

My husband walked through the door.

Then he told me something no woman wants to hear.

“I had an affair,” he whispered.

I thought we had a great marriage.

Looking back, I realized that there was a time when God was the center of our marriage and over the years, kids, work, ministry, and being hurt by people (which we allowed to be excuses for not staying in fellowship with God), and we simply let those things crowd God out.

Later health issues arose. I was alone a lot during that time and I intentionally walked into a deeper relationship with God. I spent that time in worship and studying scripture.

I knew what it meant to forgive. God had me on a journey of forgiveness for years. Forgiving my dad for the abuse was one thing, but my reaction to an affair was shock.

This wasn’t the man I married.

I couldn’t speak for hours. I just sat and cried while my husband repented for his actions.

He finally left for work. I had that whole time with my God. I wept. I screamed. I yelled. I was furious. But the conversation I had with God wasn’t comfortable, for as I screamed out my hurt, He reminded me of the sincere repentance in my husband’s eyes.

I asked God to help me forgive.

I reminded myself of the vow I made before God when we married.

Yes, this was “for worse” of those vows.

If you knew my past and the extreme abuse by my dad, you would expect me to leave. But I had seen God break the strongholds and curses from my life before, and I wasn’t going to do what my old family would have done. I was prepared to fight spiritually. I have always been a fighter. I wasn’t about to lose my marriage to the enemy.

But I’m human. I felt all the emotions. Anger. Hurt. Rejection. I struggled with my self esteem. I wrestled with guilt and insecurity.

My husband was fighting too. He carried immense guilt for his actions.

Thank goodness, we didn’t have to fight alone. Scripture says that our battle isn’t carnal but spiritual (EPH. 6:12). There were so many times I fell to my knees and asked for grace, strength, and the willingness to forgive. Then I would get up and do what the Word says, which was to choose to forgive over living in hurt.

Maybe you asked this question, like I did: Isn’t it okay to leave a marriage when someone is unfaithful? (Matthew 5:32)

Yes, I could have walked away, but just because I could didn’t mean that I wanted to.

In that verse, unfaithfulness means “living in a sexually immoral lifestyle”. In my case, my husband had repented, and I wasn’t going to leave if there was a chance we could heal our marriage.

I wondered if things would be different in our marriage if I chose to stay and forgive, and I have to be honest with you. At first, we struggled to talk about it, or anything else.  There were trust issues and our sex life was non-existent.

But we still sought God together. As we began to change separately, we began to grow closer. . . together. But only with God’s help.

We needed godly counsel. To relearn how to talk, and to communicate through those harder issues.

I needed a daily dose of God’s word, and a daily choice to forgive one more time until it felt real.

Though I forgave, trust had to be rebuilt. His unfaithfulness meant that I had a work of forgiveness in order to heal. That rested on me because I was the one hurt. Rebuilding trust rested on my husband’s shoulders.

I began to do little things in faith. I wrote little notes with a prayer, scripture and one thing that I appreciated about my husband. I stuck it in his lunch box. When we fought over small issues, I chose not to hold them over his head because of the choice he made in the past.

Is unfaithfulness any harder to forgive than other sins?

In John 8:3-11, the religious people brought to Jesus a women caught in adultery and Jesus said whoever has no sin cast the first stone.

We have all sinned and fallen short of the glory of God.

Recently I shared with the woman who had an affair with my husband that I forgave her. In John 20:21-23, Jesus said, “Peace be with you,” and then asked them to forgive.

I no longer carry a burden of unforgiveness, and I have peace as a result.

Several years has passed since the unfaithfulness. We continue to allow the Bible, and God, to change and heal us.

We allowed Suzie to share this story with you in hope that it would encourage other couples who hurt because of an affair.

And to let you know that with forgiveness and repentance and a daily choice to grow together, your marriage can become stronger than ever, for we are overcomers by the blood of the Lamb and the word of our testimony (REV. 12:11).

It seems that forgiveness is a theme in my life, and it has been painful at times. But I’m willing to allow God to peal back layers and break down walls in every area of my life, for I choose to live with an unburdened heart.

From Suzie: We had planned to share the story of forgiving her father’s abuse, when Anna confided that she had a different story to share. 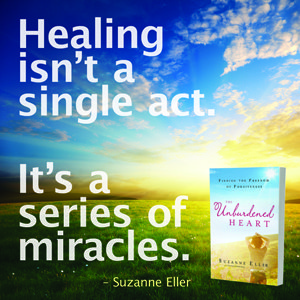 I had no idea, and as I read through the several emails as we talked back and forth, I wept.

I know both of these people and love them. For years they have kept the story between the pages of their own family, their pastor, and those involved.

“Are you sure you want to share this publicly?” I asked Anna.

Her response was certain. “We both do.”

As I read this, there are two things that really stand out to me in this week’s #forgivetolive Challenge.

In the past five years we’ve been rocked by couples and families close to us being divided and hurt by unfaithfulness. It’s made Richard and I sit and talk and pray together, and purposely choose not to take our relationship for granted, or to think that we are somehow above or beyond that temptation.

Second, repentance is such a gift. In 1 John 1:9 we are invited to walk freely into the presence of Christ and receive what we need to start fresh. If you are “Will” in this instance, there is absolute forgiveness for you, but Christ graciously leads you to a place of repentance so that you find His mercy and true transformation. Not just an “I’m sorry”, but “God, change my heart.”

If you are like Anna, or like Carly in Chapter Three of The Unburdened Heart, and you’ve been hurt by unfaithfulness, forgiving allows God to walk into the wounded and broken places and take up residence. Anna’s marriage was made whole. In Carly’s case, her husband chose to leave and be with another.

But both found healing through forgiveness. Vessels where mercy and grace abide.

Anna will be stopping in throughout the day to answer questions. I hope you’ll share your thoughts. I’m so grateful you are here. If you need prayer, please let me know. I consider it a privilege.

Also, if you are struggling to forgive, I pray you’ll consider The Unburdened Heart: Finding the Freedom of Forgiveness as a tool to help you in the process.