Forgive to live: Making peace with your past 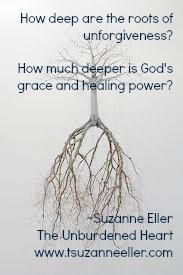 My dad and his brother aren’t talking.

My sister hasn’t talked to my other sister for years.

I wish my mom and dad would just get along. They don’t have to be married anymore. I just want them to be nice.

These are just a few of the prayer requests or comments heard over the past few years. If stacked, they would reach high to the ceiling.

Unfortunately, they reach further than that.

Tangled with each of these hopes are people. Not just those in the impasse, but those who are hit by the shrapnel from such long-lasting feuds.

Are you a believer who is holding unresolved anger?

This week Deanna Allen shared her story. As a child she and her brother were caught in the middle of their parents’ fighting, but even as adults, long after a divorce, this man and women’s hatred for each other affected their grown children.

And thus their grandchildren.

How far reaching was this anger? How many hearts did it impact?

How tightly did they hold on to the hatred, anger, resentment, when God was asking for open hands?

Let me have it.

I have more for you.

Don’t you see the plans the enemy has for you?

Making peace with your past doesn’t mean that you allow evil to flourish, or that you place yourself or your child or family in harm’s way.

But for 99% of us, this isn’t our situation. We’ve held on to old hurts or grudges, fostered and nurtured them, reminded ourselves of what they did, failing to see our part, or drawing a line of no return no matter what they say, if they change, or what God is speaking into our hearts.

Making peace with another, especially if you feel or know that they were in the wrong at the time, isn’t easy. It’s humbling.

In Deanna’s case, it rippled from a bedside to a daughter’s heart. She saw a miracle take place that she didn’t think ever would.

Matthew 5:23-25 says, “Therefore, if you are offering your gift at the altar and there remember that your brother or sister has something against you,leave your gift there in front of the altar. First go and be reconciled to them; then come and offer your gift.”

I won’t.  It’s not my call. It’s between you and the Savior who loves you like crazy. Who wants so much more for you than old arguments and bitter thoughts that keep you from all that He has for those who hear His voice and respond with, “Yes, Lord.”

But what if they don’t respond. What if it blows up in my face?

We don’t make peace with our past for results. Otherwise we would have done that long ago. We do it because our Heavenly Father calls us to live unburdened, and sometimes the cross is costly.

And that’s the gift.

We hold up open hands to our Savior. Not letting anything get in the way of following Him wherever He desires to lead.