3 surprising and simple things a funeral taught me

We lost Richard’s dad this past week.

As we prepared for the funeral, my son pulled out several battered cardboard boxes. They contained hundreds of photos, 61 years worth.

Ryan sorted them into piles. One pile held the early years of my father-in-law’s life, along with his parents and siblings. The next contained pictures of Jimmy’s wedding to his beautiful wife, along with photos of their four boys as they grew up. Next, he created four heaping stacks of photos. These were pictures of the four brothers and their families as they became dads and granddads.

I pointed to one last large pile of photos. “What are those?” I asked.

“Nothing, really,” he said.

I sat down and looked through them. There were photos of Mount Rushmore. A scenic view of a lake. An interesting sign on a highway. All landscape photos. All of them tied to a story, I’m sure. A vacation. A weekend trip. There were a lot of them, and after awhile I put them down. It’s not that they weren’t interesting. Some were.

But they didn’t even come close to those that captured Jimmy’s people. 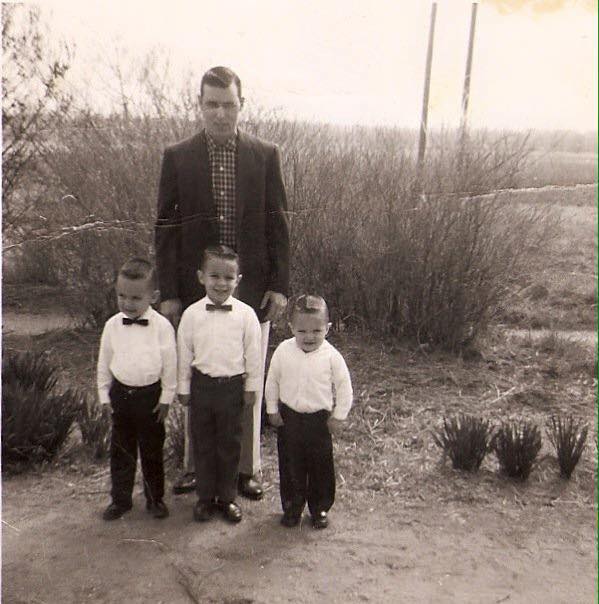 Richard’s dad is in his twenties. My husband, Richard, is about five and standing between his two younger brothers. We giggled at their matching shirts, pants, shoes, and ties. If you look close you can see three ornery, rambunctious boys posing for the camera on a cold Easter morning. The youngest’s smile revealing he is about to bust standing so still.

I do love the landscape in this picture too. The scattered hay. Weeds. You know that spring is coming, but winter dominates for now. But without the people in this picture, it’s just weeds and an overcast sky — at least for those mourning the man proudly standing behind his boys.

Capture your people while you can

When we arrived home, I realized that there were lessons in these pictures.

For example, take that landscape picture. Maybe it will hang in a frame on your wall. Maybe it will be something you can show others on Instagram, and that’s awesome.

But don’t forget about your people.

Capture them laughing. Capture a photo of that little one, even if he’s crying, because he’ll be grown up before you know it. Take a picture of your husband. Your friend. Look for those moments that tell a story, for one day you’ll want to retell it.

This next picture is of three of my littles (and their second cousin) who came to say goodbye to their great-grandpa. They played hide and seek among the bales of hay on his farm. One day we’ll talk about that day, and what it meant. We’ll tell them how Jimmy was a third-generation farmer and how he loved feeding his cows. We’ll smile at the memories of playing in the barn, and the connection between the cousins. How this is something that defines the Eller family, for my husband has over 30 first cousins and they are like brothers and sisters. My children have several cousins and they are also close.

So rare. So good. So awesome that it’s going down yet another generation.

Allow others to capture you

Allow others to take pictures of you, even if they aren’t picture perfect.

Don’t worry about filters and angles. Don’t worry about the fact that (like the picture below that I almost deleted) you don’t have makeup on, or your hair is messy or you are wearing slippers, or that angle isn’t your best for your face or your thighs.

For one day, you’ll look back and see how beautiful this moment was all along.

How Caleb saw his Gaga and Big Dad snuggling and he laughed as he climbed in to be close, too.

[bctt tweet=”Don’t worry about the perfect picture. The perfect angle. Just capture the moment. One day you’ll see how beautiful it was all along. https://wp.me/p4jbdw-4tB #livingfreetogether ” username=”suzanneeller”]

While my in-laws took a lot less photos than I do with my phone, I realized that most of mine are still on my phone or computer.

Maybe, like me, you have 1,000 pictures on your phone and a thousand more on your cloud. Let’s print out our favorites. Maybe we won’t put them in a perfect scrapbook, but they’ll be available for those who one day will handle them tenderly.

You’ll remember that day, that moment.

You’ll remember those who you thought who would be around forever, and one day they were gone.

And they’ll remember beautiful you.

Q: What is your favorite picture? I’d love to hear about it. Describe it. Tell us why it’s important to you.