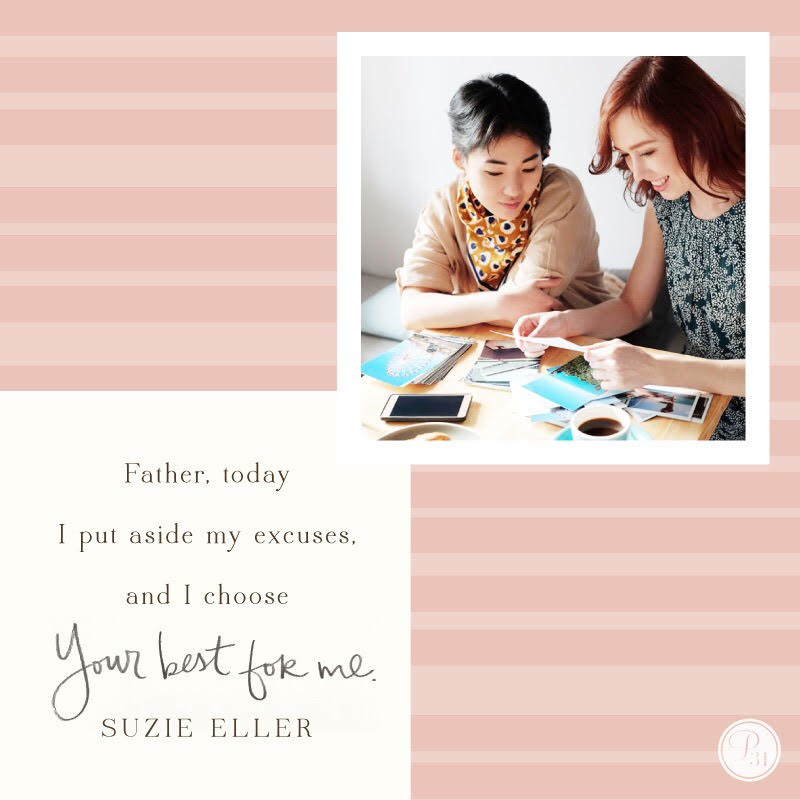 If you came over from Encouragement for Today, I’m so glad you are here! Living Free Together is a community of women who desire to live free in every way. I hope that you’ll come back often. ~ Suzie

It all started when some of my close friends and I were talking about how much our phones had taken over our life. My phone was no longer just a phone. It had become a part of me. It was always in my hand. It was close by, even at meals. I scrolled through social media, sometimes even when people I loved about were near.

That’s when my friends and I made a pact to give our phones less of us for a month. In those first few days, I felt drawn to pick it up. I almost itched to scroll through social media or check my email or news app.

Some how I come to think that I was missing something if my phone wasn’t in my hand.

After the 30 days ended, something shifted. I no longer needed my phone in my hand 24/7. I had to be diligent about it, but it didn’t get to be the boss of me anymore.

As you and I spend time together today, this conversation isn’t really about a phone. Rather, it’s about that moment when we realize that something (a person, a habit, an addiction, a behavior, a pattern, a sin, or a phone) has more of us than we want to give. . .  and what to do about that.

Know that God loves you right where you are

Our tendency is to run the other direction when we feel weak in any area. We equate “battle” with “unworthy” or “unloved.” The greater the battle, the more those thoughts can hinder us.

God’s love for us doesn’t waver in the battle.

It’s brave to admit that something has more of us then we want it to. Rather than hide our struggles, make excuses, or run the other way, we turn to a God who loves us like crazy and hold it up in the light of his love.

Lord, this thing (this person, this addiction, this habit, this attitude, this thing that has little value) has more of me than I think it should. I know you want me to live totally free, untangled, wholly open to all the good you have for me and those I love. Will you help me?

We admit that there’s a stronghold but also that God breaks those chains.

One night I picked the phone back up because I couldn’t sleep. I scrolled through Instagram, Twitter, Facebook, news apps. It didn’t help me sleep at all. It just led me down an endless road of scrolling. Before I knew it, there was that itch again. The need to be in the know. Thinking I was missing something if I didn’t have the phone nearby.

The next morning when I woke up, my eyes were heavy from lack of sleep. I was frustrated that I had got sucked back into the scrolling vortex. So, I took the social media apps off my phone and started fresh.

Whether this was a big deal for anyone else or not, this wasn’t God’s best for me.

If something is taking anything from you that is good or valuable, that’s important to note. This isn’t about being legalistic or beating ourselves up or even comparing our battle with someone else (whether it’s worse, better, not as big a deal).

It’s being honest with ourselves. It’s being aware that this trips us up and robs us of good things.

Lord, the enemy has a plan for me, but so do you and that’s the plan I receive today. You desire that I live an abundant, full life. When I start down a road that isn’t healthy for me, give me the wisdom and discernment to turn the other way, and the courage to follow through.

Realize that you are worth fighting for

Maybe this is where you think I’m going to share a plan of some sort. Perhaps a one-two-three “do this” step-by-step formula.

Instead, may I share an excerpt with you from The Spirit-Led Heart?

On one side of the ring, the contender holds his hands in the air. He’s circling, posturing as if he’s greater, bigger. He believes that he is cunning, and he’s already acting as if he’s the winner.

The one standing on the other side of the ring is meek, but there’s no mistaking his strength. He’s surrounded by a host of angels. His beauty is not in his countenance, but in his love for humankind. He’s fighting not for himself, but for the world. Despised and rejected, he is a man of suffering, familiar with pain. The punishment that brings peace is upon his shoulders, and by his wounds we are healed (Isaiah 53:3, 5).

This battle is the true battle and has already been won.

When we are in a battle, no matter what that looks like, we may feel crushed, bruised or forsaken. We may feel that we are without help. We may not know how to help ourselves.

We have a Helper!

In the same way, the Spirit helps us in our weakness. We do not know what we ought to pray for, but the Spirit himself intercedes for us through wordless groans. Romans 8:26 (NIV)

We have someone fighting on our behalf. We are worth fighting for. We’ll have plenty to do to meet that battle in the flesh, but he reveals how to combat spiritually. The Spirit of God, who lives in us, helps and strengthens us, even when it seems there is not fight left in us. Our opponent may believe he’s bigger, yet we are overcomers because of our faith.

We can make plans and and that is good. We can get counsel and that is so wise. Yet, one of the most powerful steps we can take is to stop trying to fight the battle in our own strength.

We are worth fighting for.

[bctt tweet=”You are worth fighting for. When we realize that, the battle shifts to include a God who loves us like crazy. #livingfreetogether https://wp.me/p4jbdw-4Gz” username=”suzanneeller”]

As you make your plan, invite God into the midst of those plans. As you battle, don’t try to do it on your own. Let the one who loves you lead the way.

That’s where our freedom begins, no matter what our battle looks like.

3 ways to know if something has more of you than you want it to.

1. You keep creating “plans” that don’t work.
2. It robs you of thought, time, and energy and gives little value in return, but you still do it.
3. People who love you try to tell you that it’s addicting, unhealthy, or consuming you or damaging a relationship, but you make excuses or defend it.

The Spirit-Led Heart: Living a Life of Love and Faith Without Borders (<– to download Chapter One and other helpful resources)